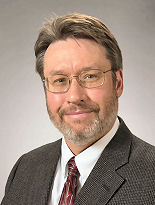 Professor Richardson is Senior Associate Dean of the College of Liberal Arts & Sciences and Professor in the Department of Chemistry. In the dean’s office, he serves as senior associate dean with a focus on faculty affairs. He previously served the college as Associate Dean for Research. His research program focuses on the study of reactivity in transition metal chemistry and main-group chemistry, particularly in catalytic reactions of biochemical, synthetic or industrial interest. They seek to identify the mechanistic principles that lead to efficient and selective catalysts for a variety of biochemical and industrial processes. In recent years, the focus has been on oxidation chemistry and catalysis using main group oxidants such as hydrogen peroxide and chlorine dioxide. The Reliox process, now in commercial development, was invented in his group. His classroom teaching has been at both the undergraduate level and the graduate level in the areas of general and inorganic chemistry.